Six monarchs and their cursed servants were waiting for a child born on the day of an eclipse. Eventually the monarchs won the war and protected the child. But when the monarchs tried to cut the neck of the last marquis (a nobleman), "when the red moon comes back I will come back for the child." Then … the night sky turned red. "

Originally released for the Road to Kingdom finale last month, Oneus released a surprise MV for "Come Back Home" with terrible monsters, a child in need, six well-dressed "monarchs" and an abandoned moonlight forest. In its own right, the MV is a horror-like monster story of intrigue and danger – but when combined with the story in Road to Kingdom, it becomes even more apocalyptic.

There is frankly a staggering number of layers and theories that could be inferred from the short four minutes and sixteen seconds of the song, but history all seems to focus on the six monarchs being spoiled when the sky turns red and fighting to protect a boy boy. It begins with them as noble monarchs who fight terrible creatures in the dark of the night with long fingernails, gnarled faces and frighteningly pale, lifeless eyes. However, in the struggle to protect the fateful child, the monarchs are defiled and transformed and transformed into something that is not entirely human or monstrous.

Interestingly, it doesn't seem immediately clear whether Oneus is the protagonist or the antagonist of this story. The story is told as if the monarchs are protecting a child from dark power, but the entire video does not make it clear when the sky will turn red when the monarchs are still protecting the boy or holding him captive. The cursed servants are waiting for the child, and the nobleman (or marquis, as they are called) is beheaded before the cursed servants. Regardless, the imagery is full of different characters, monsters or whatever. 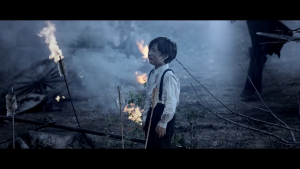 The pictures are closely related to the usual monster tropes and lunar folklore. The moon is often represented in rituals, superstitions and environmental phenomena in a variety of cultures, religions and literature. It may also be interesting to note that the video was released on the same day as a moon in the first quarter and a full moon is rapidly approaching on August 4th. Typically, new moons are viewed as gateways between other worlds and supernatural events. Any public school teacher could probably tell you the old superstition that their students are always particularly loud on a full moon day.

Although the story is closely linked to lunar science, long-standing creatures such as vampires, zombies, lycanthropes and the like manage to be present in this video, which is shown through backdrops, choreography and costumes. Animal or claw-like movements, not to mention the elements “metamorphosis under the light of the moon” evoke a series of werewolf or lycanthropic images. The strong, all dressed in breathtaking white, pale princes costumes in the theater scenes make the members look ethereal and vampire-like. Terrifyingly, the choreography at the beginning and at 1:28 makes it look like they are drinking the blood from the neck of one of their substitute dancers and submitting to their will. All the undead, the thirst for meat, and the squat movements of their limbs could also indicate zombie traits.

The choreography and the impressive pictures in the video are somewhat the stars, especially since the music has already been performed on Road to Kingdom. However, the music itself has a number of characteristics that make it sound fearful, as if it were just taken from a horror film. The texture for much of the song is thick, with loud overdub guitar, 8 VB vocal doubling, and rock instrumentation. Generic rock sounds are seamlessly combined with EDM sound sampling and are most commonly used to signal harmonic transitions and reinforce dance breaks. The genre of sounds doesn't seem to have a meaning other than creating a greater variety of sounds and timbres within the music itself.

It actually took me a while to figure out why the introduction to the song sounded so much like a horror film or a plaintive requiem. I finally realized that it reminded me of notorious pieces like the Dies Irae Mozart's "Requiem", "O Fortuna" by Carl Off, or the strict violin that opens Saint Saens "Danse Macabre." All of these pieces have a similar introduction, but all have similar relationships to death, destruction, and fate. While the music is vaguely similar, the triggers with death are no accident. These pieces are themselves famous magnates, whether you can identify them by name or not. Such subtle nods are often enough to make thematic connections to the original source material.

The texts on the other hand are quite repetitive. Some verses stand out, especially "soon the white sky will turn black, even the blue moon cannot shine on me" and "you are still chasing me". It's unclear who the intended theme of the song is, but in this context, it seems that an unrequited love story is a metaphor for rejecting the dark corruption that is overtaking it. Despair and rejection can bring people to extremely dark places, just as it seems to protect a fateful child born from solar eclipse from monsters you can imagine. 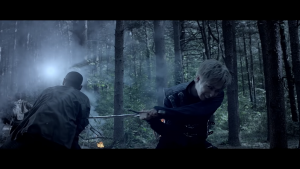 This MV reminds me of a M.C. Escher Painting, especially those like “House of Stairs” or “Relativity”: endless layers to decipher so that you feel more and more confused and know exactly what you don't know instead of what you do. The images are intentionally vague while still nodding to the legendary monster lore, heavenly superstition, and a full story with narrative. The music is fearful of connections to classical music related to death, and the lyrics take you to a blackened heart and a darker night. And in the end we stay on a cliffhanger.

Oneus teased the mind and senses, making it clear that this is just the beginning of a dangerous story of fraud, danger, and death. If a full moon is approaching quickly and there is just enough time to simmer on such a complicated MV, it will be interesting to see which chapter comes next in history. If superstitions of blood moons are signs of this, we face a wild ride.