All the signs pointed to a conclusion: With their comeback "Favorite Boys" and the accompanying album The Butterfly Phantasy, AS would delve into Zhuangzi's famous butterfly dream. While “Favorite Boys” is one of the standout songs of 2020 so far, its MV is… a disappointment.

First, an explanation: Zhuangzi, also known as Zhuang Zhou, is one of China's most famous ancient philosophers. His work of the same name is a cornerstone of Taoism, philosophy and Chinese literature. Zhuangzi's (translated) butterfly dream reads as follows:

Soon I woke up and there I was, myself again. Now I don't know whether I was a man then who dreamed I was a butterfly or whether I am a butterfly now and dream that I was a man. There is necessarily a difference between a man and a butterfly. The transition is called the transformation of material things.

There is a lot to unpack here: Zhuangzi questions the boundaries between dreams and reality and wonders whether our dream self is actually our true self. He also notes that we may never know – because how can we be so confident that we are not stuck in a dream world? How can we exactly distinguish reality from dreams?

Given these complex ideas, all of the teasers for ACE's comeback seemed very promising.

The teaser “opening video” showed an intensive performance with the spoken word. "But is it you who cast a spell on me?" mumbled the members, seemingly linking the butterfly dream to the concept of ambiguity in love – just as Zhuangzi is unsure whether he is a butterfly or a man, ACE asks if she or her lover is the adorable one.

And the teaser video shows the members staring at a platter of fruit before giving in and eating the fruit – perhaps a correlation with Eve's original sin. If the MV "Favorite Boys" had actually continued the cinematic themes of its teaser video, it might have become a complex juxtaposition of ancient Chinese philosophy and the equally ancient Western religion – a very unique way of expressing K-Pop's familiar "alluring love" to shape theme.

The concept photos also seemed to suggest a dramatic, nuanced MV, filled with references to Zhuangzi's butterfly theme. The photos were filled with traditional Asian images that looked almost like stills from a historical drama.

Even the album cover – adorned with "胡蝶 之 梦", Chinese for "butterfly dream" – strongly linked the comeback of ACE with traditional Asian culture. 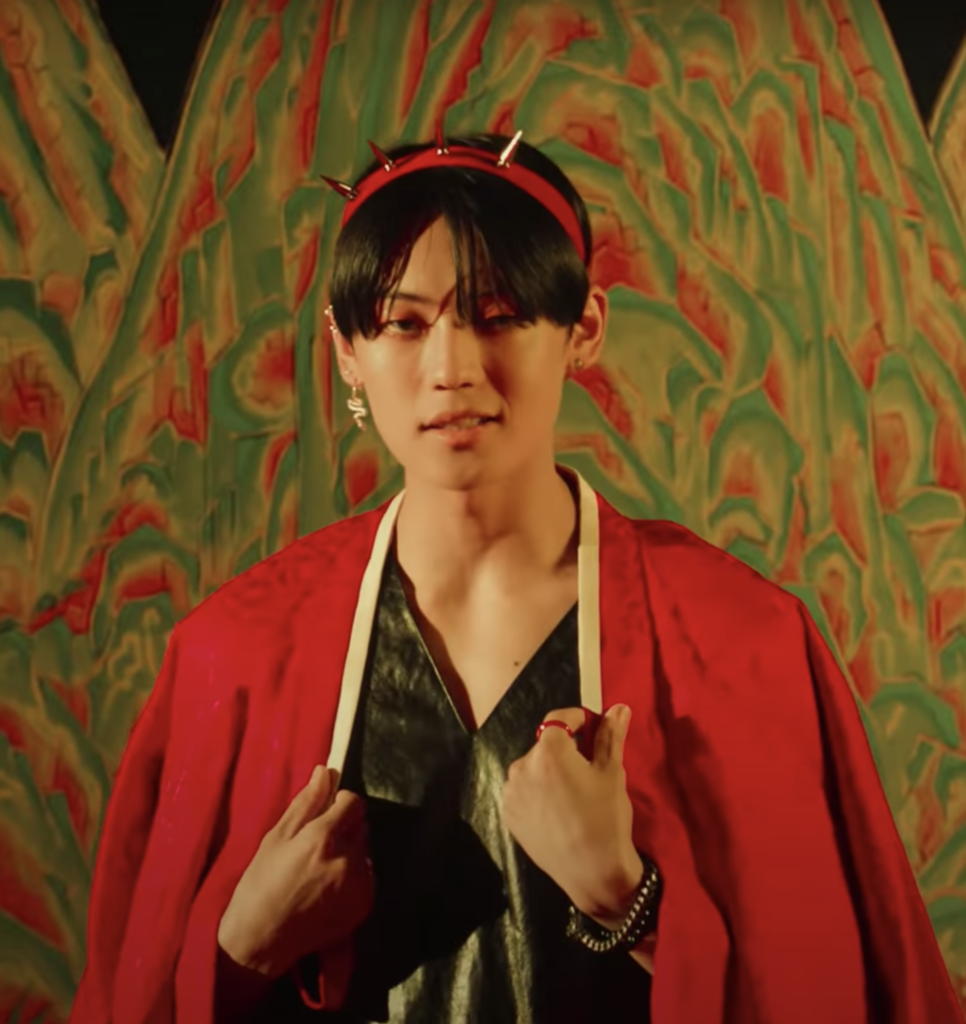 Unfortunately, it wasn't meant to be. For ACE, none of these fierce ideas explored in their MV "Favorite Boys". Instead, the MV is dedicated to striking juxtapositions of traditional and modern images with a helping of gender-specific fashion from ACE. The MV “Favorite Boys” is absolutely competent by K-Pop standards – but given its dramatic teasers, the video almost seems appropriate and insulting.

The MV is a study of contrasts. Take, for example, the use of traditional and modern elements. In one scene Jun wears a Nike headband while standing in front of a much more traditional backdrop of a gnarled tree and paper-framed doors. In a different setting DonghunThe flowing robes are in direct contrast to the extremely modern and artificial green lighting.

Impressive knocks and sings against the backdrop of bamboo and shelves full of red and green vases – an image strangely reminiscent of the animated Mulan film. Check red and green. Bamboo, check. Black and white cow pattern, check. (Do you remember Mushu's iconic line? If not, be ashamed of your cow!) 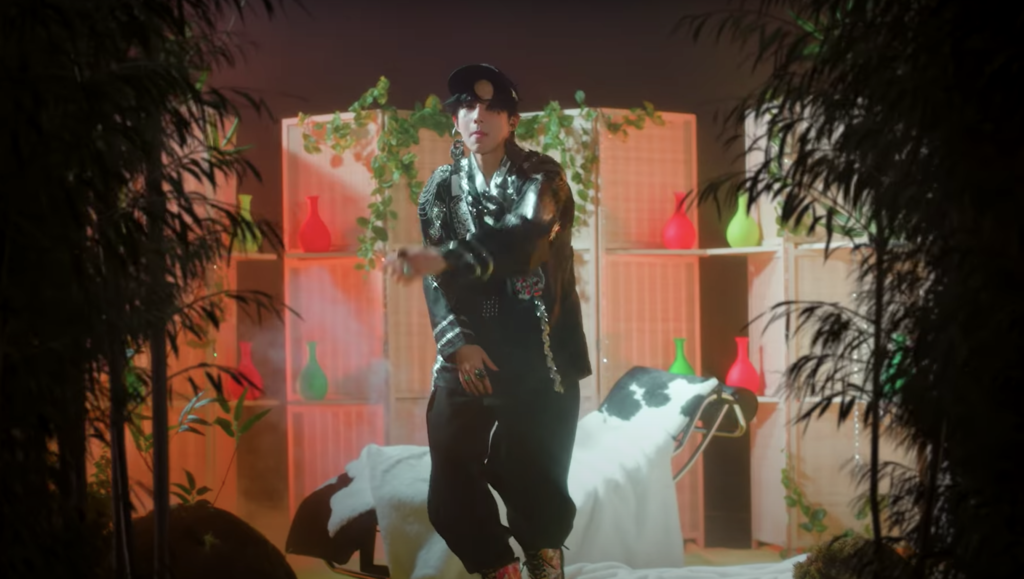 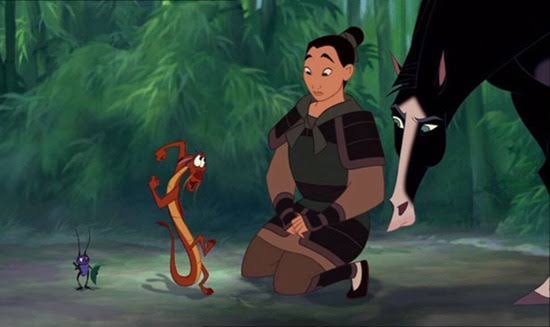 Anyway Chan is also shown with boldly clashing reds and greens. His solo shots show a landscape that is apparently inspired by traditional Asian painting styles – but with the red-green contrast mentioned above. Chan's solo scene has a color contrast, but also a traditional-modern contrast.

Given these bold, saturated colors, the choir dance set seems completely out of place. Members appear in front of a stark white and black background that looks like traditional paper doors. (Is it just me or does this scene look very similar? NCT 127"Kick It"?) Later some bright reds are introduced into the choir recordings. But the choir scenes still feel almost flat compared to the vivid colors in the verses – not a good choice.

And of course “Favorite Boys” plays as an ACE video with gender contrasts. Consider ByeongkwonStrongly feminine makeup and fashion with a dainty butterfly. But the next setting is his abs, which instantly switch from hyperfemininity to hypermasculinity. 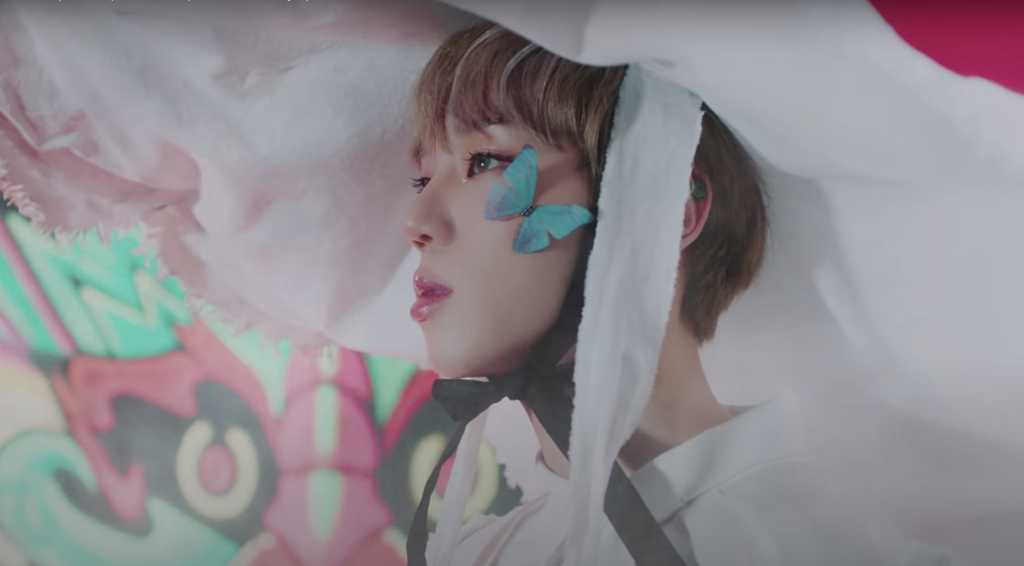 Later in the MV there is a shot of Jun with beautiful eye make-up accents: four small white dots on his eyelashes. Although male K-pop idols wear heavy eye makeup, they rarely sport creative little embellishments like Juns – this is a relatively feminine look. But even when we see Jun's beautiful make-up, we also hear his very manly voice – another contrast.

Finally, Favorite Boys uses a third subtle reference to gender: dragons and butterflies. In traditional Asian culture, dragons represent masculinity and phoenixes represent femininity. Since ACE strives for a butterfly dream concept, they have replaced phoenixes with butterflies here. Ordinarily we would expect this portrayal of the sexes as a "boy in love". However, note the lyrics of "Favorite Boys":

I am the haters' secret favorite

Check the cell phone bet that has ACE in the playlist

We do better, our shape is different even when you try to look from a distance 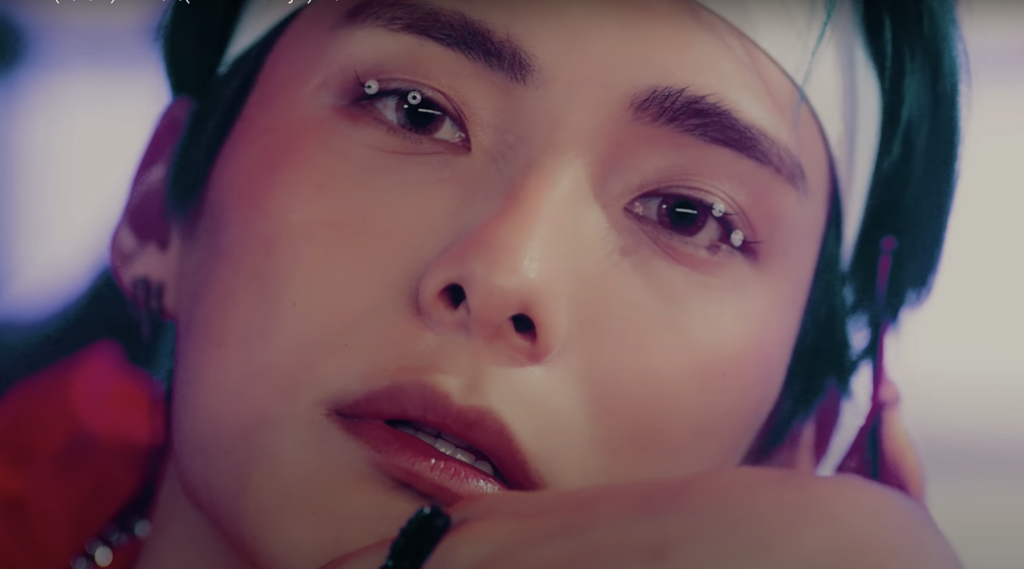 This song has a pretty simple message: shut up, haters! I am everyone's favorite boy! See my greatness! With this (admittedly egocentric) theme, the MV leaves no room for romantic reflection – instead it is intended as an expression of ACE's self-identity. So when depicting both dragons and butterflies, is the MV perhaps suggesting that all humans can have both masculine and feminine elements? Maybe?

And from there we can maybe say that "Favorite Boys" is … um, a brilliant application of Zhuangzi's idea of ​​ambiguity to modern gender stereotypes … um …

Yeah no Look again at the texts. They are flat. Vapid. This is not a deep song. This is not an artistic song. "Favorite Boys" is a blast of simple fun – it would be silly to try and turn this boastful song into a real artistic statement. 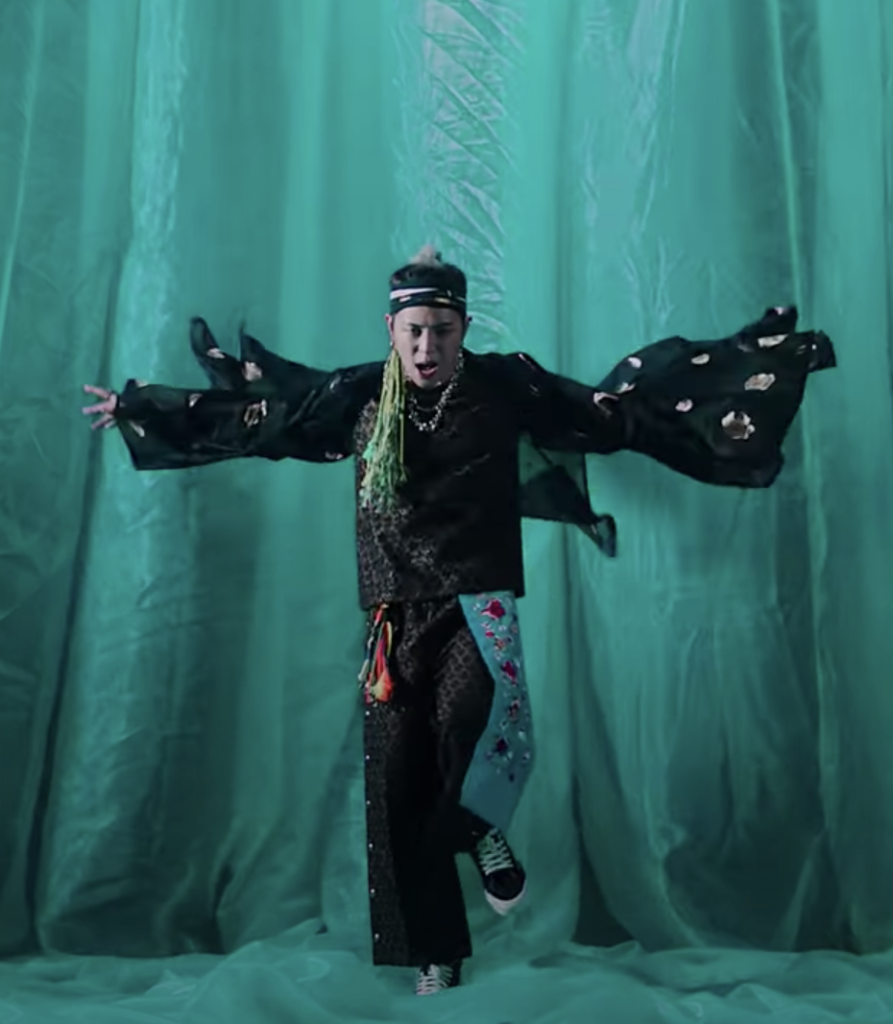 But if ACE wasn't about to navigate the intricacies of Zhuangzi's famous Butterfly Dream passage, then why all the pretentious teasers? Why did they have to play traditional graphics so often? The answer is simple: cultural appropriation.

not how SuperMACE has already spent way too much time teasing an "insightful" and "philosophical" song with their excellent "Tiger Inside" which never tries to be anything but cheesy. No, "Favorite Boys" doesn't match either of the two descriptors – I mean, just listen to the crazy chorus! "Ddak come out, come on, hit-hit-hit me!" indeed.

Because it has been marketed as thoroughly as a profound and dramatic representation of Taoist philosophy, the superficiality of Favorite Boys is harmful. It appears that ACE knowingly ignored all the nuances of an ancient Chinese literary masterpiece and used it as an "aesthetic" instead. Cultural appropriation, plain and simple. 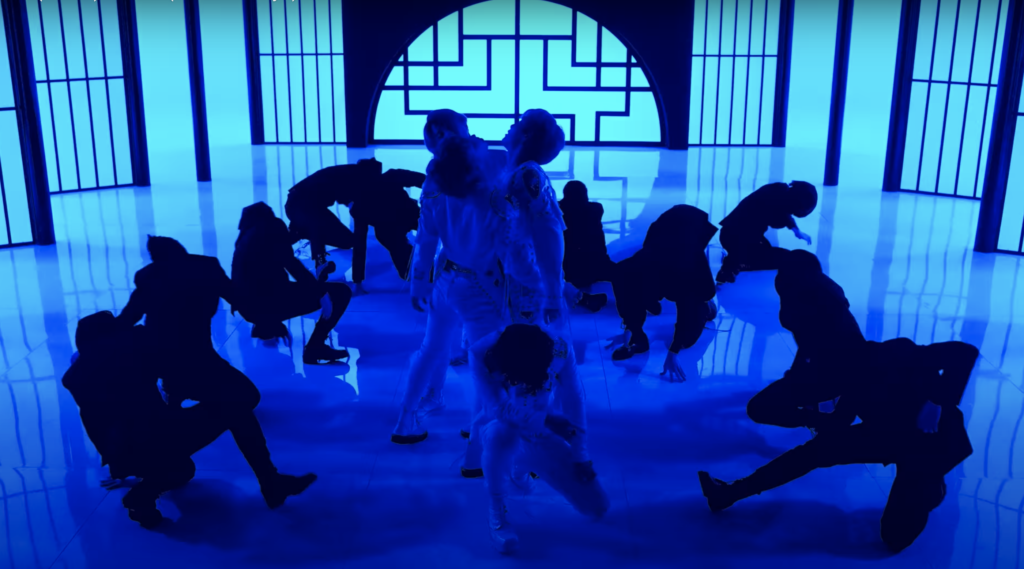 That is, my ears cannot see. "Favorite Boys" is a musical, if not a visual masterpiece. The mix of rock and hip-hop feels very authentic. During the first verse, a hint of distorted screams à la “side effects” creates a quick jolt of texture and interest – although luckily the screams subside without exhausting their reception. Another fascinating production selection: horror show synthesizers. It's been a while since I've heard something as unique as "Favorite Boys" in K-Pop.

Those idiosyncratic touches are wonderful, but “Favorite Boys” is also a surprisingly powerful example of classic songwriting. It bucks the latest musical trends – double-time snare drums during the pre-chorus, short, simplified choruses, second-verse trap breakdowns – and instead focuses on a consistent, coherent sense of energy. 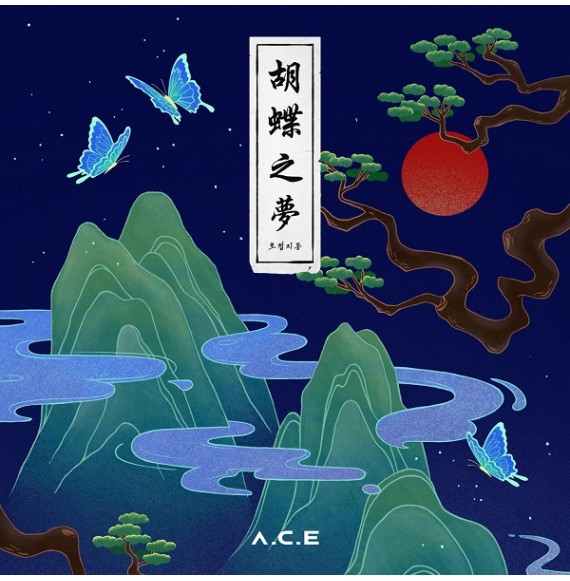 The unusually long refrain with a chant-like hook giving way to a more melodic section is one of the few two-part K-pop choirs this year. This complexity characterizes "Favorite Boys" as a song that will probably age very, very well – because there are always new layers that have to be unzipped when you listen to it.

What's even more exciting is that the second verse of "Favorite Boys" actually feels like a cohesive continuation of the song's energy! After so many harrowing trap rap verses, “Favorite Boys” feels like a real breath of fresh air.

Despite the poorly conceived MV of "Favorite Boys", I actually adore the song. It is imperative not to love. Take my words with a grain of salt – I'm not a Taoist and I'm a Chinese-American. I don't know how "favorite boys" might be perceived by Taoists or Chinese citizens who are more deeply connected to Zhuangzi than I am.

So, dear readers, let me know what you think of Favorite Boys in the comments! Let's indulge our own philosophy: Can musical strength compensate for offensive images?